The saga story continues – but if you’re just joining us, start with part one – here!

Three months into our relationship, Dan and I boarded our plane for a trip to Hawaii.  He’d work most days during our trip, and I’d wander around Honolulu on my own.  We did find time to sneak in some sight seeing, a surf lesson, and a hike through the rain forest.  Each evening we’d enjoy the most amazing meals I’ve ever eaten.  We would stand arm in arm on the sand and watch the sun set.  It was here that I knew I was utterly in love with this man, and that I’d hoped to spend the rest of my life with him. 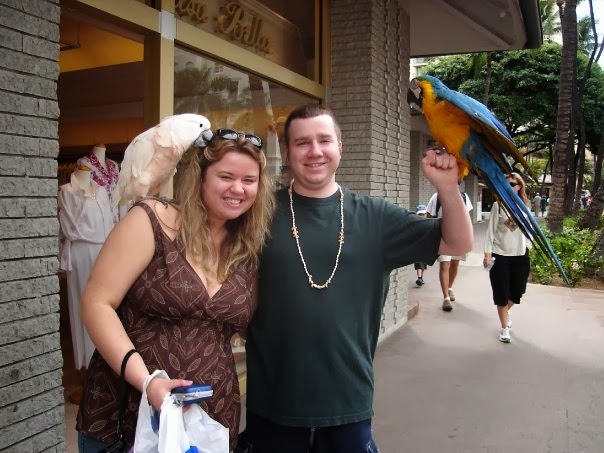 …and we were only three months in…

The very last night of our trip we were to leave Hawaii in an evening flight, arriving through Charlotte and back to Pittsburgh in the early morning hours.  I’d be back just in time to make an important meeting.  On our way to check out of the hotel and meet our airport transportation, we listened to the voice messages on our phones telling us that our flights were delayed – as were all of the large aircraft of it’s kind.  They were all being checked for some mechanical issue.  Coupled with the fact that this was the same week that Hawaiian Airlines was collapsing, the Honolulu Airport was pretty disastrous.  Our flight finally left around 1 a.m., now heading to LA where we’d transfer to Chicago and then Pittsburgh.  In LA, our flight was again delayed.  Arriving in Chicago, we hit terrible weather.  When we arrived, there were no more outgoing flights for the night and we were sent to a local hotel.  We’d now been attempting to get home for 24 hours.

Our cab driver that drove us to the hotel offered to pick us up and return us to the airport in the morning. He kept his promise, and dropped us off in front our ticket desks.  As I went to get my ID out of my purse – I made a horrifying realization: my purse was not in my backpack.  I’d left it in the cab…

Why is this long story pertinent in our love story?  Well, I’d dated my share of jerks – many of which would have gotten angry and frustrated in a situation like this.  Many would have yelled, criticized – and some would have even left me there to figure it out myself.  I had a moment of panic before I realized that Dan would do none of those things.  Calmly, he helped me solve the problem.  We found a policewoman, who helped us get through security.  The policewoman who actually found a priest who prayed with us for safe travels and for the purse to be found.

And of course, now waiting to get home (36 hours later) our flight is delayed – again.  We’re sitting there utterly exhausted, and starting to consider renting a car to drive home from Chicago.  Our gate is changed and we shuffle through the airport like zombies.  And then – a miracle.

In storms a police officer.

“Are you Heather Keefe?”
“yes…”
“Your purse will be coming in through those doors in just a minute.”

And there it was – my purse.  Every dollar in place, every tic-tac untouched.  We happily boarded our plane, and finally made it home – almost 48 hours after we first attempted to leave Hawaii.

Although the purse story is fun to tell, it is really very pertinent to “our story.”  Despite the misadventure, I discovered that Dan and I could handle a bad situation.  He handled problems calmly, with patience and kindness.  I realized then, that Dan was the guy I’d want to have beside me no matter what challenges life threw our way.

Only one more chapter to go – keep reading here!