I have been thinking a lot lately about my Brayden and how close we were to having a singleton pregnancy – and how much we would have missed out on if he hadn’t made it.

You see, we found out we were pregnant very early, and as I had some abdominal pain, the doctor recommended an early ultrasound to rule out an ectopic pregnancy.  I remember asking the doctor – “do we need to rule out twins because of the chlomid?”  “Oh no” he said “the chances of twins are still very slim.  Don’t worry about it.”

After trying to conceive without luck for a year, our doctor had put us on the lowest dose of chlomid available and told me that it would only increase my chances from 2% to 5%.  Nothing to worry about right?  We’d hardly given it a second thought especially after the doctor’s assurance that we were fine.

When we got to the ultrasound appointment, the tech informed us that there would be a split screen “Don’t worry – it doesn’t mean you’re having twins” she told us.  “You’ll see the split screen with one live image and one where I’ll freeze the screen to snap the picture.”

The whole time Dan and I chatted along, with the tech asking us general questions about ourselves and our pregnancy without saying much in identifying what she was seeing.  I was so clueless – I had no idea what I was looking at either.

“Is everything okay?” I asked – worried still about the potential of complications.  “It’s definitely not ectopic” she said and I breathed a sigh of relief.

I had no idea… I mean – ZERO idea that there were two for the vast majority of my ultrasound.  The first clue I had was when she listened to the heartbeat, and then went back again, and listened to it twice.  She must have needed to confirm the rate I figured.

Even when she typed Baby A and Baby B on the screen for the first time, I didn’t assume it was two babies.  Pictures from two different angles right?  Like the top side and bottom side?

When she was all finished, she wiped the gel off of my belly and said very calmly.  “Let me tell you what I’m seeing here.  There are two embryos, both with good heart beats.” I about fainted.  Holy sh*t. Two babies – two babies – TWO BABIES!  “How will we ever pay for college?” were the first words out of my mouth to Dan.  (Looking back, how naive I was for this to be the biggest concern)

The tech interrupted my moment though, needing to finish.  “I am seeing though, that Baby A’s yolk sack is very small in comparison to Baby B.  You need  to realize that sometimes, when pregnancies are diagnosed so early, one embryo could absorb.”

So there we had it… We had two babies, after trying and wanting them so badly, but one might not make it.  You love your babies instantly – from the moment you know they exist.  And for me, I’d already fallen in love with this one baby in my belly – but now there were two?  In some ways I almost felt betrayed by the fact that all the bonding I’d been doing with my vision of a “child” was in vain.  I got over that quickly though, and started the process of worrying about Baby A.

So what did this mean – a twin with a smaller yolk sack?  I called my doctor frantically, wanting answers.  “What were our chances?  When would we be in the clear?  Why does this happen and can anything be done?”

Like it seems is often the response in early pregnancies – nature had to take it’s course.  They had no answers, no research or statistics.  Armed with the internet and a world of online medical journals, we began searching.  What we found was, that based on his measurements, Baby A had a 50% chance of making it.  While my heart was overjoyed to have two, it ached with worry and fear that we’d loose half of our double blessing.

I should point out here, that I have learned so much in my short time as a mom.  One of these things is that God doesn’t worry – He always knew Brayden would make it.  He never feared for the sweet baby in my belly, He already knew how many golden hairs would be on little Brayden’s head.  So when we’re biblically told not to worry and to trust fully in God – it’s for good reason.

For the next few months, I was so fearful that the next ultrasound would reveal only one remaining twin – vanishing twin syndrome, where one baby “disappears,” absorbing into the other.  But each time, there he was.  Still with a small sack, but there none the less.  He was thriving, and while I don’t remember the date – we were eventually assured that whatever risks he faced in early pregnancy were gone once he started making his own amniotic fluid and no longer relied on a yolk sack.

Because his sack was always a little smaller, we eventually knew that the the boy was the one we’d been praying for for all those months.  My sweet Brayden…  How different my life would have been if our coin had flipped the other way. 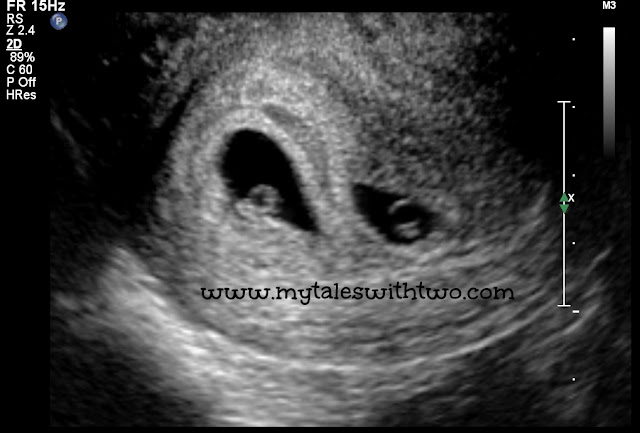