So it’s been almost a month since I posted anything, but as you can imagine, I’ve had my hands full with two new little ones and so finding time to blog has been limited.  It’s so important to me to document these days though, so I’m going to work harder to steal a few moments to write.  I especially wanted to make sure I recorded my “birth story” before I forgot all of the details.

So after postponing our cesarean for a week due to Julie’s potential lung issues, our eagerness and anxiety had reached it’s peak on December 22.  I slept surprisingly well the night before (considering the countdown to the biggest day of my life), and we were out the door by 6 a.m..  My wonderful parents insisted on arriving at the same time we did, just to give me a hug before I went in.  I was really glad they were there in retrospect as I was quite the ball of nerves.  We were called back at 7 a.m., and began preparations for surgery.  I was amazed at how quickly everything happened really.  I put on my hospital gown, had my heart rate and blood pressure monitored, and my nurse (Haley) talked me through the preparations.  One major issue at this point in the game was my IV.  While Haley gave it a good shot – it collapsed in my one “good vein” and we had to wait for the anesthesiologist to arrive to give it another shot.  I had prayed and prayed to have good nurses and anesthesiologists, and God really came through.  Dr Somethingorother – who preferred to be called Max – came to talk me through the anesthesia and do my IV.  He had to go deep in my wrist, even giving me a shot of local first to numb the pain.  My doctor stopped by to see how I was doing, and soon enough, it was time to go into the opperating room.

I walked in myself, and was suprised how small it was. I guess I watch too much Grey’s Anatomy and expected this huge room with high ceilings. My nurse got me through the spinal, I layed back on the table and then Dan came in beside me. By this point, I was over being nervous, but was sure glad to see him.
The doctors kept pinching my skin, and each time, I could feel the pain on my left side. They kept waiting thinking the spinal just needed more time, but, it never changed. Luckily, Max had put in both a spinal and an epidural cathetar, so they were able to dose me up so I didn’t feel the surgery.

So one thing I didn’t expect (and maybe my experience was unique) was how “out of it” I would feel both during and after the surgery.  The most distinct thing I remember while I was giving birth was the feeling that I was falling asleep, feeling like I had to mindfully remember to breathe, and that I was really really hot.  This was definitely unpleasant. 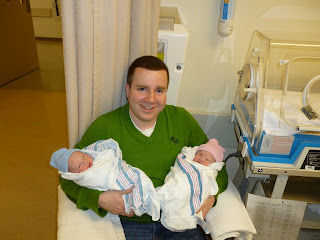 What made up for all that lousy feeling, was the moment I heard the babies cry, and their weights announced. We were shocked that Julianna weighed 6 lbs, 8 oz., and Brayden (who was supposed to be a very large baby) weighed only 5 lbs., 11 oz.  They gave Julianna to Dan to hold while they finished my surgery, and the nurse held Brayden close by.  Holding two at once seemed a bit intimidating to us both, but when they placed both babies in my arms as they wheeled me out of the OR – I was in heaven (and high as a kite).

Recovery was rough, still feeling like I had the worst hangover in the world, and like I was hanging out in a sauna.  Apparently this is a very unusual experience as most new moms in this situation are freezing cold.  I did throw up numerous times, and they continued to give me anti-nausea medications, which made the hangover feeling worse.

I had been worried about the fact that I wasn’t going to get to eat for hours after the surgery, and unfortunately, I wasn’t even able to keep down the ice chips they gave me.  While all of this does sound unpleasant (and it was) it’s the reality of my experience.  The warm loveliness of holding my sweet babies took a bit of time for the meds to wear off – and certainly was amazing. 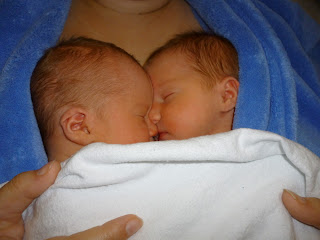 After the first day in the hospital, I was a much happier new Mamma, and got a chance to really enjoy the blessing of my babes.  I could hardly get over how Brayden stared into your eyes with such intensity.  He was (and is still) so very tiny.  Julianna has such a laid back personality, stretches around, and came out with a head full of puffy little hair.  The hospital stay was much better than expected with delicious food, and patient and accommodating nurses who gave me everything I needed – and gave me space.  My parents stayed for most of the days and evenings while I was there, and my in-laws came Friday to meet their new grand-children.

I had expected to be out of the hospital on Monday due to medication issues, which was then changed and so expected discharge would have been Sunday – Christmas Day.  Luckily, I was doing so well that they allowed me to leave Saturday Night around 9 p.m. on Christmas Eve.  It was so great to not have to spend Christmas in the hospital (despite the good food).  We even were able to make it out to Aunt  Kim’s Christmas Dinner the next night.