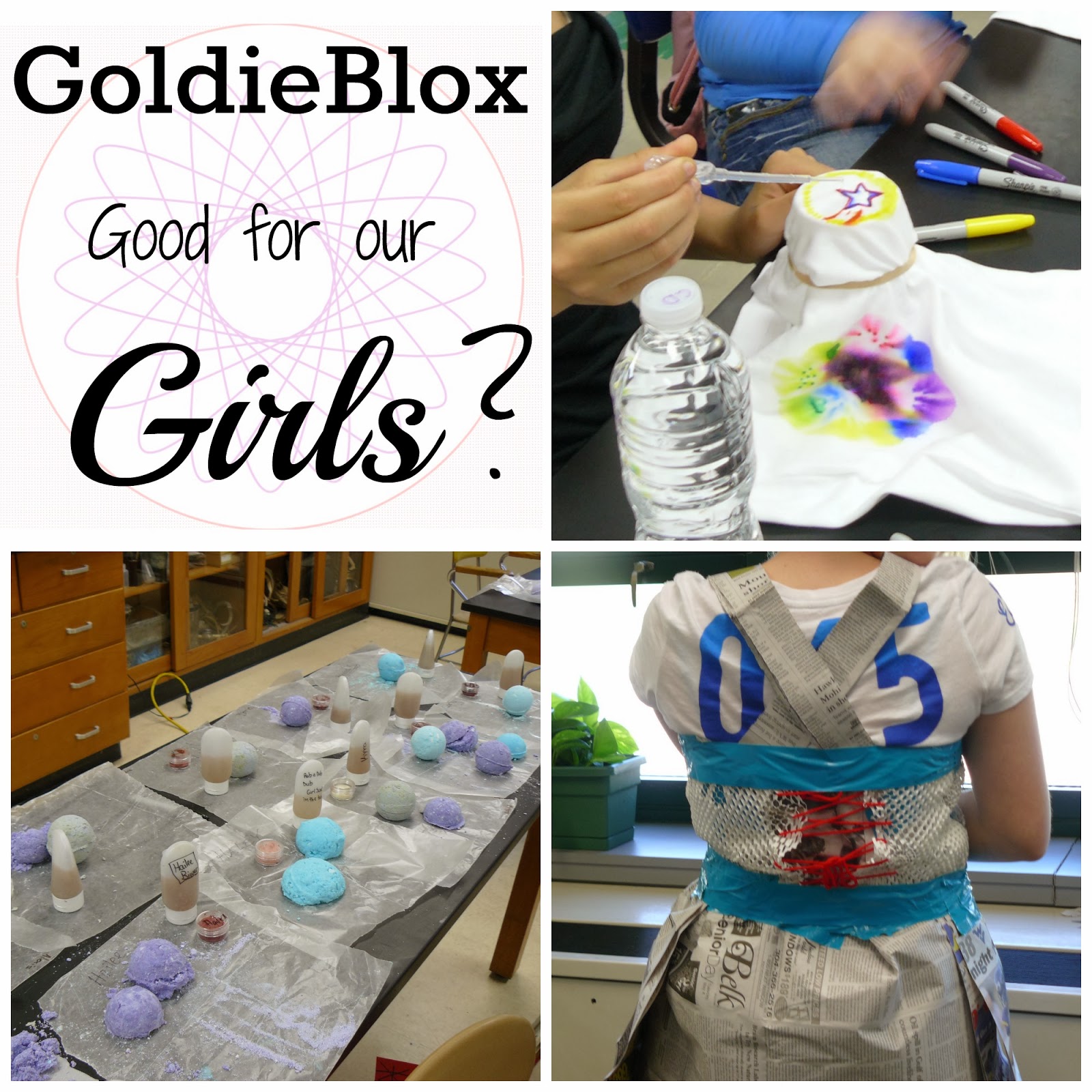 The internets are all a twitter about GoldieBlox – whose superstar Super Bowl ad has put them at the top of facebook’s trending topics.  But the buzz is not all positive, criticizing GoldieBlox for their targeted marketing of “gender normative” girls.  Criticisms about product quality, copyright infringement, Chinese labor, and the need for “girl friendly” products drawing the interest of young girls into the STEM fields (Science, Technology, Engineering, and Math).

While I can’t speak about the product quality or the politics of the product, I just can’t help but add my two cents about the need for “girl friendly products.”  So many critics, including many female STEM professionals and strong minded feminists are sharing their beliefs that our girls don’t need gendered building and technology toys in order to be interested in STEM.  Generally, the perspective is that we should bring these general building and technology toys out of the “boy” rhelm, and into one of gender neutrality, where girls can engage with these toys in the same manor as the boys do.  Some have even gone as far as to call GoldieBlox’s toys “sexist.”

And while I am a passionate feminist, with a background in sex and gender studies, I also worked for five years for the Girl Scouts – for a number of those years focusing in STEM programming.  I couldn’t agree more that we should be working constantly to “de-gender” many of the toys our children play with, I’d also argue that we don’t have the time to wait until these changes are made.

The Girl Scouts have done tremendous research in the past few years about the opinions and experiences of girls in STEM.  There have been two major conclusions that I think speak to support GoldieBlox’s attempts to make a unique toy appealing to today’s girls.

First, the research is showing that girls enjoy different type of activities with their STEM experiences – primarily in “creation” or “helping” experiences.  So for instance, one of the programs I helped develop while working for the Girl Scouts were those that allowed girls to tell their stories through digital design such as with the ALICE programming software.

Secondly, we know that girls who consider themselves “into” STEM also have much more support from their families, are more likely to be high school and college graduates, and more likely to believe that they deserve equal wages.  Those elements all make it seem like liking STEM make a girl more likely to succeed – but I argue that it actually is the opposite.  I would consider this data to show that girls who are supported, confident and been exposed to egalitarian ideals, are the ones who are most likely going to perceive themselves as “STEM-Girls.”

But what about the rest of our girls – those who don’t have the same supports and exposures?  Don’t they too deserve every opportunity to stretch their mental wings and become our nations best innovators?

And so I argue, just as a mother would, that sometimes we need a “stealth approach” to help our youth have those things that they need – even if they aren’t savvy enough to choose it themselves.  When I ran a STEM Conference in my former position, I avoided dry workshops about algebra or physics – but instead – we learned the chemistry of cosmetics in making lip balms and bath bombs.  We learned about solubility in tie-dying with sharpie markers.  We taught them about digital media and programming with iphone apps.  We learned about carbon footprints and had a fashion show out of recyclables.

Some might think that we “dumbed down” the science for these girls – but that’s not it at all.  We made science fun and accessible to ALL girls, not just those who thought they liked science.  If the CSI workshop inspires them to take biology, or if making a candy model of a nuclear reactor sparks their interest and empowers their confidence to further explore their interests, I have no regrets in “pinking things up.”

As a mom, I work my absolute hardest to limit the gender defining influences by which my kids will undoubtedly be influenced.  I know though, that from the moment we turn on the television, read a book or play with friends – I am powerless to block all of the world’s influence on how my children “should do” their gender.  That’s not an excuse to lay back and not fight the fight, but a sensible acknowledgement that today’s girls ARE influenced by the world’s media.  They may not be confident enough to pull out a box of Kinex or ask for a Lego Robot for their birthday.  I hope that someday, they all get there.

But in the meantime, if GoldieBlox’s Spining Machine or Parade Float gets one more girl interested in STEM – if one more disease is cured because a girl inspired by a GoldieBlox product becomes a scientist – have they been so damaging to the landscape of STEM Girls?  I used to tell my program partners, “while you’re the expert in your field, I’m the expert at girls.”  While there may undoubtedly be higher quality building toys that can teach more complex concepts, if they’re unattractive to the “everygirl” are they helpful?  I’m so glad that there are many girls out there who are comfortable with neutral toys for building and innovating, but lets not forget the rest of our girls.  The ones who are a little less confident and a little less exposed, just might need GoldieBlox to “pink it up” to get their attention.