I think back to those words I first spoke when I found out we were having twins – “how will we pay for college?”  I was so completely unaware to the challenges of parenting multiples that I was oblivious that the 18 years prior to sending them to college would be way more of an issue than figuring out the financial aid.

Today was a really tough twin day – one where my bag of Chic-fil-a burst open pouring onto the concrete as I struggled to carry both to the car, and then in an attempt to get my keys and open my van door, one child darts out of my reach, running though the parking lot as a drag the other to catch up and get him before a car did.

Thank God for the sweet (random) woman who came up and asked how she could help – I shoved Brayden into her arms, and went back to fishing for my keys.  “I think you lost a binky” she said.  “I think I’m loosing it all” I responded.

Being a twin mom is ROUGH sometimes almost all the time.  I’ve read too many Twiniversity posts where moms debate back and forth on what’s harder – infancy or toddlerhood.  The reality is that none of it is easy, it’s all impossible.

My mom has asked me lately why it is that being a “stay-at-home” mom isn’t enough for me, like it was for her back in the 80s and 90s.  I wasn’t able to put my finger on an answer when she asked.  Maybe it was because she’d already had a full teaching career before she stayed home?  Maybe it’s because more women work today and I want to still be part of that world.  It wasn’t until today that I realized that without this blog and GiggleBuzz, I’d likely go off the deep end.  If I was purely measuring my success on days like today, I’d honestly feel like such a failure.

I still struggle to not get frustrated by those who poo-poo the struggles.

To the writer of that last remark (on another twiniversity facebook post), I just want to say “bless your heart – I’m so happy for you.”  My kids must be broken, ’cause despite my best attempts to persuade/baricade/duct tape them to my legs, they just aren’t learning to stay.  It’s these type of statements that really make me shake my head.  The first two are oblivious about this level of chaos, but moms – especially other twin moms – who try and act like they have it all together aren’t kidding anyone.  And even if they’re way better at this than I am (which I’m sure many are) it’s certainly helping no one to shove your success in our failing faces.
I think though, about all of the ways I’ve changed in the past 21 months I’ve been a mom.  Two years ago there are so many things I would have “never ever done” that are now are just part of my reality.  For instance, prior to running through the parking lot, I allowed my child to walk around the restaurant waving at people.  She wasn’t trying to escape, wasn’t crying, and was within sight – I counted it as a good strategy.  Even while she was sitting on the floor in the middle of the restaurant walkway, I lost my drive to care what people thought about her antics and figured they could just walk around.
Before our lunch debacle, we ventured to pick some apples at a local farm.  While Brayden was scared of the branches and hid in his stroller (figures) Julie took the opportunity to bite every apple she could find from the ground.  She was a connoisseur of dirt coated, grass glazed, bug crawled apples – and I just turned around and let her have at it.  Meh – she won’t die I figured. 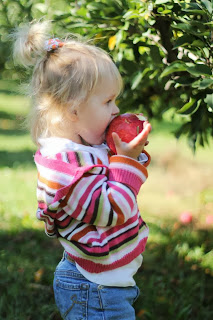 It’s kind of sad that that is our new standard of success – not dying.  Truly Dan and I had this conversation today.  It went something like this:
Dan: Well at least they didn’t get hurt, that’s your job Heather – keep them from getting hurt.
Me: But that’s part of the problem, how can I ever prevent that when there’s only one of me?  There will be a day when one gets hurt because I don’t have enough hands to protect them both.
Dan: Well then – at least they don’t die.  There it is, your job is to ensure their survival.
Mom and I mused at the potentials on how to prototype some device that would join the babies together (with a strong belt around their chests, with a device somewhat like one used for guide dogs) to keep them running in the same direction so I could follow.  If they run in separate directions while strapped together, at least they’d slow each other down.
After my adrenaline had cooled, and my heart slowed down, I came to realize the truth of twin motherhood.  If every day was like today, I would gladly struggle through, than to have had only one.  They say anything worth having is worth fighting for.  Today may have been quite the fight, but it’s one I’d gladly take on for the joy and abundant blessing of mothering my sweet babes.
Twin mom friends – I won’t pretend I’ve got it all together.  I’m a very obvious hot mess circus leader who has been broken to no longer care what people think.  To those new twin moms who’d ask “does it get easier?” The answer most will say is “it only gets different.”  I can only agree.
I recently realized though, one amazing truth.  I am happier than I ever anticipated I’d be in my life.  Also more tired than anticipated, but definitely happier.  I’ll take all the fits, the dirt, the binkies and tears, – so glad that I’ve been granted the beautiful opportunity to fight for these wonderful kids who are so worth having.